HomeBlog / Latest NewsCasanova‘History of My Life’ by Giacomo Casanova

‘History of My Life’ by Giacomo Casanova 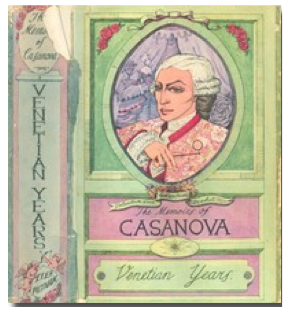 When we mentioned to people that we were putting together a graphic novel on Casanova there was a certain amount of wink winking and nudge nudging. Casanova the archetypal womaniser is what comes to most people’s minds. And it is true, he was a man who was fascinated by love and love-making. In terms of the numbers, however, he wasn’t that exceptional amongst his peers, especially when you take into account that he was such a charismatic, educated (and frequently wealthy) single man and an inveterate traveller. What has set him apart is the fact that he wrote about his affairs (along with everything else in his life) in incredible detail and with great psychological insight and honesty. In fact, his autobiography, ‘History of My Life’ (twice the length of Tolstoy’s ‘War and Peace’!) is increasingly being recognised as one of the great works of European literature.

If you wanted to find out more about his autobiography, a fascinating story in its own right, Dave has written an article on ‘History of My Life’ (or ‘Histoire de ma Vie’) which is freely available to everyone – how Casanova came to write it, how its badly translated and pirated versions did so much to create the Casanova myth, and how, in fact, it is a philosophical enquiry as much as a set of memoirs.  We’ve also created a Pinterest board for ‘History of My Life’ which you can find here – https://uk.pinterest.com/theworldofcasan/histoire-de-ma-vie/