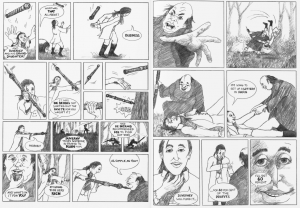 Two thirds of the way through chapter 4 (‘Place de Fleurs’) we created a sequence where Stefano meets Casanova in a wood.  Having painted an unsympathetic picture of Stefano’s personality in chapter 2 (‘Stefano, Marie and Giuseppe’) and earlier in chapter 4, it was now time to shift the balance of the audience’s sympathy towards him, at least to some extent.  This was important for a couple of reasons.  For a start, it accords with social and psychological reality.  Generally, our first impressions of people become modified upon subsequent meetings.  Interestingly, there is a well attested phenomenon whereby people tend to like a person or character more strongly who they have come to like after initially having had a bad impression of them.  Then there is also his relationship with Casanova.  We know that Casanova is in his debt because Stefano once saved his life but the ‘wood’ sequence begins to hint that there is more to the relationship than simply gratitude.

We chose a rural setting for the first meeting alone between them and we have Casanova coming to Stefano.  These two aspects shift the power dynamic, creating an increased sense of equality which is more reflective of a relationship based on genuine friendship.  The countryside is more Stefano’s domain.  He is at ease there in a way he isn’t in an urban environment.  The social insecurity and awkwardness he feels around people is less acute.  Next, their conversation makes us realise very quickly that Stefano is someone who Casanova has taken into his confidence.  He knows intimate details about Casanova’s relationship with de Bernis, for example.  Stefano also acts as a corrective to Casanova’s natural tendency to arrogance and vanity.  He may be a friend but he is very much a critical friend.  This is a rare quality amongst the etiquette, politics and sophistication of the cultural elites in whose company Casanova frequently finds himself.

In this sequence we reveal Stefano to be a much more dynamic and astute character than we might otherwise have suspected.   Firstly, in the opening few frames, we show that he is aware of somebody spying on him from behind and, secondly, he demonstrates impressive hand-eye coordination in springing a man-trap into which Casanova was about to step (at the same time, reinforcing an ongoing theme of Stefano protecting Casanova).  He also later shows that he is more than capable of looking after himself physically when Casanova makes the mistake of pointing his knife-cane at him; another incident which highlights a degree of equality.

Finally, as well as telling the audience more about Stefano and his relationship with Casanova this sequence does a few other things.  It supplies the audience with some backstory about Casanova and de Bernis, it introduces the lottery idea, Stefano adds an ominous note of warning that highlights Casanova’s outsider status and his vulnerability as a foreigner and we take the opportunity to display Casanova’s knife-cane skills.  The latter prepares the audience for the time when Casanova uses it in earnest while at the same time adding a bit of additional action.  Without any prior intimation, his later use of the weapon might appear less convincing.

‘Casanova in Paris: The Shadows of the King’ are now freely available here.