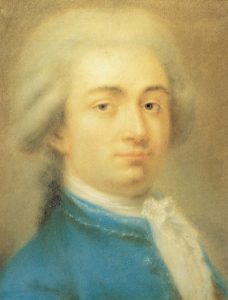 Venice’s most successful and beloved playwright and poet of the eighteenth century was Carlo Goldoni (1707 – 1793) whose work is still alive and kicking, most recently in the guise of the Broadway and West End hit ‘One Man, Two Guvnors’ which is based upon Goldoni’s ‘Servant of Two Masters’.  There has been some speculation that he was, in fact, Casanova’s father.  He was a friend and admirer of his mother’s, who he mentions in his own Memoirs, and, indeed, wrote a play specifically for her.

A potted bio of Goldoni by Marlo Ihler can be read here.

If you wanted to dip into some of Goldoni’s work, an English translation of his comedies can be found here.

‘Casanova in Paris: The Shadows of the King’ is freely available here.